Μενού
Σύνδεση
Εγγραφή
Install the app
You are using an out of date browser. It may not display this or other websites correctly.
You should upgrade or use an alternative browser.

Why Homeric Ithaca can't be in Poros Kefalonia.

​
We have completed our research regarding Homer’s Ithaca and its position as it is described in Odyssey.​
​
Ithaca as it is concluded in Iliad but mainly in Odyssey has to fulfill these sixteen indisputable arguments.​
Of these conditions, ten do not match Kefalonian Poros’s Homer’s Ithaca. Another landscape is described by Homer and other things see our eyes:​
​
1. Ithacans live in the westernmost part of Odysseus’s empire. Their area is low and features lovely sunsets. The rest of Odysseus’s islands are lying more toward the East and exposed to the sun (Οδ. ι΄-9. 25-26).​
2. The rest of the islands apart from Ithaca lay between it and Elis (Οδ. ι΄-9. 25-26).
3. Rafts carrying sheep, goats and oxen were the means of crossing from Ithaca municipality to that of Cephalonia (υ΄-20. 187 & 210).
4. The transition to Pylos from Ithaca takes one night. The return from Pylos to Ithaca takes half a day plus one night. Therefore take place in different ports that are far apart.
5. The cartel of suitors to kill Telemachus, as he turns from Pylos to Ithaca, take place in ports behind a rocky islet in a STRAIT, which is located between Homeric Ithaca and Homeric Sami. The islet must be towards Homeric Ithaca, between them and close to it (μεσσηγὺς) (Οδ. δ΄-4. 671 & 844-847).
6. In order for the arc fight to take place (feat), a large space is needed. Odysseus’ palace must have had palais de sports dimensions (rapsody 21).

These points alone would be enough, but in four others we find that the theory of Poros is far from the Geography of Homer:

7. Scheria is almost as far from Ithaca as Thesprotia, - starting point to Dodoni’s oracle. So it is Kerkyra.
Phaeacians brought Odysseus directly from Scheria – Corfu to an already known seashore where the sand’s thickness allowed to slide half of the ship ashore by the impetus exerted by the rowers (Οδ. ν΄-13. 114-115). So it is Atheras.
8. The distance between the pig paddock and the palace should be four hours using the path and 2.5 hours by the proper way. Ithaca’s size should be large since the same route by ship lasts from morning to afternoon.
9. The beaches of Ithaca must be defined by straight line shorelines since the name Ithaca derives from the Homeric word Ithys which means straight.
10. Athena, when she scandalously supports Odysseus, Telemachus and Penelope, has the adjective Pallas, a word reminiscent of Paliki and Vibrating Rock.


For these ten reasons and especially because it has no islands between it and Elis, is not low and in the west, no one goes with rafts to the municipality of Kefalonia, does anyone want to come back from Pylos less time than to go, the Pheasants disembark Odysseus in Melissani, a day's road away from the Eumaios of Tzanata, indicate for palace space of small dimensions and has no Asterida in a STRAIT, it is excluded that Poros is Homeric Ithaca.​
If there was no dog in the sealstone, the coat of arms of Ulysses, but a lion, there is no way that the Tomb is of Ulysses.


Argument 4 in detail
​
Telemachos’s journey to Pylos, lasted one night to go and one night plus half a day to return since he disembarked in another port of Ithaca.​
​

The distance between the two ports as we analysed in 16th Rhapsody (π΄) is indeed half a day.


This point refutes almost all theories, because they place the two ports close to each other (Lefkada). The new Ithaca and Paxoi, as well as Assos of Eryssos are very “little” places to fit this difference. Moreover, Poros is gimmicking again since he places Telemachus’s arrival in Skala. He also organises “Telemachus” running competitions there and closer to Pylos. This means that he would wish Telemachus’s departure to last longer than his return which is the opposite.


Paliki and Telemachus follow Athena’s order and direct the ship initially toward Ehinades, Arkoudi – Atokos; next morning they observed Fiskardo; they avoided Asteris’s ambush on the left well inside the depth of the dangerous channel. From there, they ended up in Athera where, scandalously, coincided with Odysseus’s arrival from the North. Odysseus was travelling from Scheria – Corfu one day earlier so their meeting could take place in Evmaeus hut in the remote areas of Ithaca (Atheras) – the first Northern seashore. There they could meet in their convenience away from the city.

…There they would have a quiet chat and organize the suitors’ massacre! .​

Is Odyssey the work of one man? It’s about an Incompatible and inviolable theatrical production directed in real time, real places and events! Amongst his other qualities Homer was a great director.

​
Argument 5 in detail. The Asteridas’s ambush.

As you can see the Suitors’ ambush takes place in a rock island inside a STRAIT (ἐν πορθμῷ). The word «ἔνι» = in front of defines that in front of the rock island there are two ports safe from winds where you can set an ambush, to lurk as Doliha (1) and Palaiokaravo (2) according to our theory.

We have the Asterida of Daskalio (3). Thiakians as well as Assos also have Asterida. We have Asterida in a STRAIT...​
...Telemachus by-passes it coming from the Ehinades on top. After an hour he reaches the first seashore of Ithaca.​

... And Poros who places it haphazardly far from Patras!!!

I'm missing it right now, lest the Paxos place Asterida somewhere open, airy and prospere in Malta.
No strait, no theory.
Asterida is in a strait. Between the Homeric Ithaca and Homeric Sami.
The show is over! 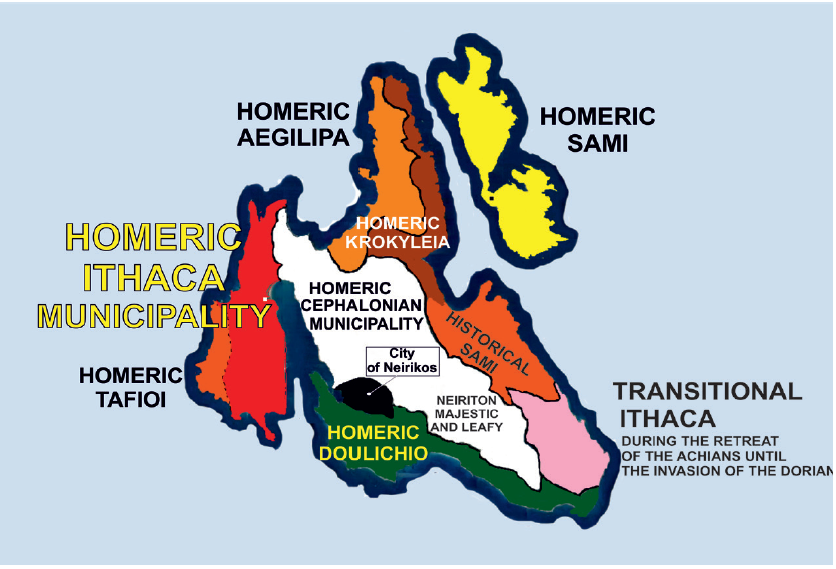